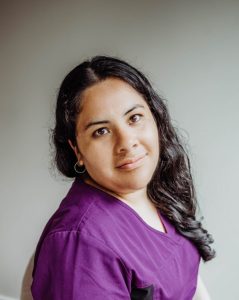 Mahara is a 2004 graduate of Cedar Ridge High School in Hillsborough, NC, and a 2006 graduate of the University of North Carolina School of Dentistry with a degree in Dental Assisting.  She has been with our practice since it began and is an integral part of the office. Mahara has completed all levels of the Dentrix Mastery Tracks and was featured in the Winter 2018 edition of Dentrix Magazine.   Mahara is married to Raudel, and they have three children; two beautiful daughters, Cristal and Maricarmen, and they welcomed a beautiful baby boy named Felix to the family in 2020. Mahara is from San Luis Potosi, Mexico, and is bilingual.